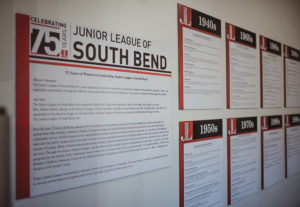 The League funded a Child Advocacy Center in 1991 and gave $100,000 to the Center for History for its “Kidsfirst Children’s Museum.”

The League undertook a two-year, $70,000 project to furnish the kitchen at the Center for the Homeless in 1988 and helped to fund the Center.

In 1965, the League began a project to restore the library at the County Historical Society, remodel an exhibit, develop docent programs and traveling exhibits and paid for a full-time director.

During World War II, League programs included at least one wartime project and for the 1941 Holiday Ball, the League held a contest to spur sales of war bonds, crowning four “queens” at the dance, one from each South Bend high school.

The Reserve League applied for membership in the Association of Junior Leagues of America in 1942 and was accepted by AJLA in 1944.

As a parting gift on the project at Camp Darden, the League gave the camp $1,000 toward an annual camp operating fund.

In 1931, the League commenced a five year commitment to the Perley School lunchroom project. The League served free hot lunches to poor first and second grade children. A partial-year Thrift Shop opened at 125 W. Washington Street in 1931 with donated goods. Members worked at the Visiting Nurse Association, Anti-Tuberculosis League, the Children’s Dispensary and were paid models for the Studebaker Corp. A gift of $1,000 was made to the Committee of 100 for gardens for the needy.

In 1932, the League paid for “fresh air” rooms at Oliver, Muessel, Lincoln and Jefferson schools for needy sick children who needed daily rest and more food.

The League raised funds in 1933 to support Camp Darden at Healthwin Hospital, a children’s camp founded in 1919 by the Anti-Tuberculosis League. The camp had been forced to close in 1931 but in 1934 the League paid for building repair, meals and upkeep. The Anti-Tuberculosis League added another building to Camp Darden in 1935 and the League paid for furniture, camp upkeep and staff.

In 1928, the League decided to diversify its programming and gave $250 to the Girls Reserve as a parting gift. That year, the League started a book rental library, operating several sites until 1935.

The next year, members assisted Children’s Dispensary doctors and were party of a Motor Core Committee to transport patients for the Visiting Nurses Association and Children’s Dispensary. Other members met monthly at Epworth Hospital to make surgical dressings. The City Rescue Mission Committee met weekly at the Mission to care for pre-school children of mothers who attended a sewing circle. After the three-year Rescue Mission project, the League tutored in a boy’s ward at St. Joseph Hospital, went on monthly field trips with young children at the Children’s Aid Society and started a rolling book cart at Memorial Hospital.

The Reserve League of South Bend.

The Junior League of South Bend, Inc. began in March 1927 as a fourteen-member Reserve League under the leadership of Mrs. Robert Happ, Mrs. Edgar Carver and Mrs. George R. Swintz, its first president. All three women were board members of the Young Women’s Christian Association (YWCA). The Reserve League was founded to raise funds for the YWCA Girls Reserve, hence the name Reserve League.

The first League funds raised for charitable purposes was the sale of T.B. (Tuberculosis) stamps in 1927, followed by the first Christmas dance, now known as Holiday Ball, which netted $900 of which $600 was donated to the Girls Reserve.

Groups in Boston (1907), Brooklyn and Portland (1910) were followed by Baltimore, Philadelphia and Chicago (1912). That year, representatives of the first six Leagues met in New York for the first national Junior League conference. By 1921, there were thirty Junior Leagues in the Association of Junior Leagues in America (AJLA).

From the start, the Junior Leagues differed from other volunteer organizations. The mission statement of Leagues reflected a commitment to volunteerism, developing the potential of women and improving the community through effective action and leadership of trained volunteers. The goal of each League was to educate members about community needs, identify essential ones and develop projects to meet them.

Junior Leagues shifted their focus from settlement house work to social, health and educational issues that affect the community at large. During World War I, Junior Leagues played an active role selling bonds and working in Army hospitals.

The Junior League is Founded.

Mary Harriman, a 19-year old New York City debutante with a social conscious, forms the Junior League for the Promotion of Settlement Movements. Harriman mobilized a group of 80 other young women to work to improve child health, nutrition and literacy among immigrants living on the Lower East Side of Manhattan.

What do we do?

The Junior League of South Bend, Inc. is an organization of women committed to promoting voluntarism, developing the potential of women, and improving communities through the effective action and leadership of trained volunteers.  Its purpose is exclusively educational and charitable.

By continuing to use the site, you agree to the use of cookies. more information