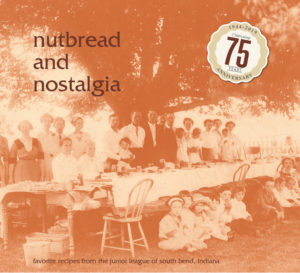 Since 1979 and sales of 50,000, the Nutbread and Nostalgia cookbook had sold out by the mid-2000s. This cookbook had been distributed to 100 local merchants and was featured in trade shows by The Junior League of South Bend members. Members gifted this celebrated book to families and friends throughout the country.

Past published reviews of Nutbread and Nostalgia included consumer descriptions as “5 stars,” “A Treasure,” “Classic,” and “A Must-Have Cookbook.”  A range of cuisines with top recipes from Junior League of South Bend members and the local community were prepared in their homes and taste tested several times by other individuals.

Treasured past recipes were combined with modern conveniences. The charm of this cookbook (just over 300 pages) is captured in the simple, homestyle Midwestern recipes, many of which were handed down from generation to generation.  More modern recipes complemented the collection in this cookbook.  Sections include: hors d’oeuvres and appetizers; beverages; brunch and luncheon dishes; soups and sandwiches; breads; salads and salad dressings; poultry and game; fish and seafood; menus; beef and veal; lamb and pork; vegetable and side dishes; desserts; cakes; pies; cookies, candies and condiments; substitutions; metric and equivalents; acknowledgements; and an index.

Contributors of treasured vintage photographs include local community members, The Northern Indiana Historical Museum, and the Library of Congress.  Midwest living near the 20th Century is depicted through sepia images and appropriate quotations that capture “unique warmth and spirit of Americana.”

What do we do?

The Junior League of South Bend, Inc. is an organization of women committed to promoting voluntarism, developing the potential of women, and improving communities through the effective action and leadership of trained volunteers.  Its purpose is exclusively educational and charitable.

By continuing to use the site, you agree to the use of cookies. more information